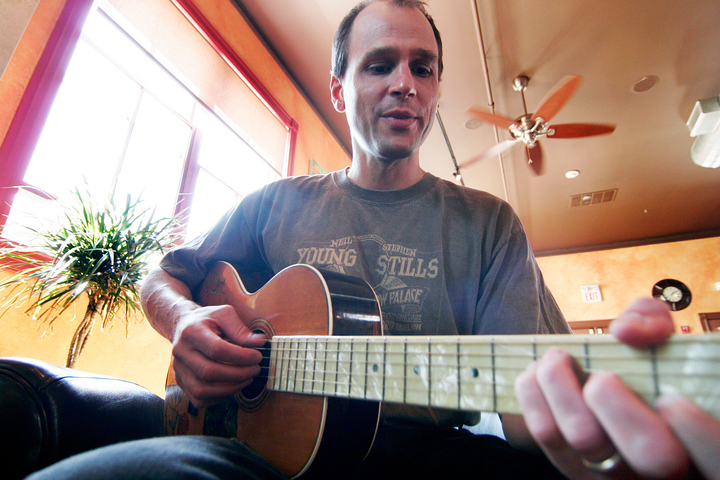 Carl Cacho has firmly established himself as one of the most talented and respected singer/songwriters in New England. Boston Music Award Nominee for Outstanding New Singer/Songwriter, winner of the Rose Garden Coffeehouse Singer/Songwriter Competition, finalist in the Kerrville Folk Festival, Telluride Troubadour and Boston Folk Festival songwriter contests, his songs and disarming performing style have made him a favorite at venues across the Northeast. Folk legend Tom Rush personally selected Carl to perform with him at a "Club 47" show at Harvard University's Sanders Theater and Carl was invited to participate in the Fifth Annual Martha's Vineyard Singer/Songwriter Retreat, started by Christine Lavin.

Carl got his start among the open stages of the fertile New England folk scene while still a teenager in the late 1980's. He developed his unique brand of songwriting throughout his early 20's, while working as a social worker and living in Colorado, New York, Michigan and Massachusetts. It was as a graduate student of social work in Ann Arbor, Michigan, that Carl began performing professionally, becoming a regular at the world-renowned venue, "The Ark." With encouragement from two of his earliest heroes, Ellis Paul and Catie Curtis, he decided to return to New England to further hone his craft. He has since become a featured performer at some of the most prestigious venues in the area, including Club Passim, Tupelo Music Hall, Johnny D's and dozens of others.

Written with stunning detail and clarity, Carl's songs draw the listener into focused snapshots of events and people that usually pass unnoticed. An eclectic mix of musical styles is evident throughout his work - bluegrass, blues, country and rock all make appearances, depending on the need of the lyric. His songs have been covered by many of his peers, including Jack Hardy, Kevin So, Stephanie Corby, Pat Wictor, Charlie Strater and Jimmy LaFave. His album “Spark” features duets with Jimmy LaFave and Kris Delmhorst as well as appearances by Ellis Paul and Mark Erelli. It was one of the top 10 played albums on Folk Radio for 3 consecutive months.