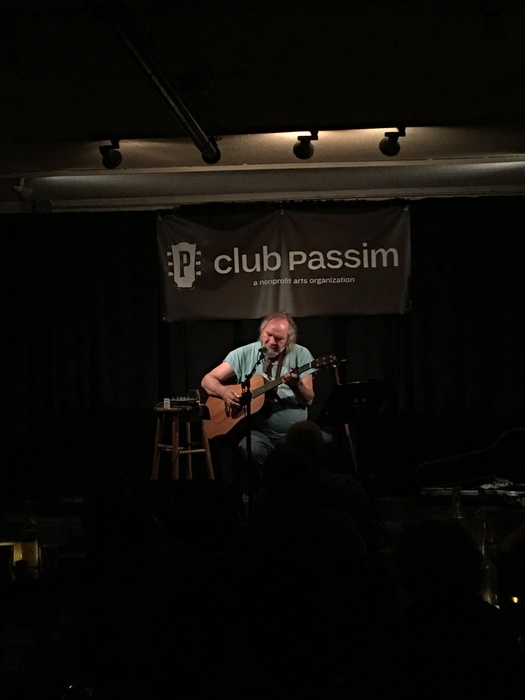 Below are some thoughts I wrote down after seeing Eric Taylor play at Club Passim. Along with playing out more I've been trying to write something longer than a text on a regular basis just to keep from turning into a, as my daughter says, "Banana Brain".


The first time I heard a Townes Van Zandt song was back in 1990 - I was just starting to play open mics and my good friend Chris Hoffman was backing me up on guitar. We were doing original songs as well as a few covers, Neil Young, Paul Simon, Cat Stevens. Hoffy (as I affectionately called him) brought me a tape of "Pancho And Lefty", perhaps Van Zandt's best known song, and asked me to learn it. He said it was his Dad's favorite song. It didn't connect with me at all and I said "No". You can look at my website timeline to see Chris and I with our guitars. I regret to this day I didn't learn it for him.

When I moved to Colorado I heard some more Townes Van Zandt and my boss let me borrow his "Live At The Old Quarter" record. I listened to it, but I can't say it grabbed me. I had some good friends in a Bluegrass band and they sang "If I Needed You". I liked that quite a bit.

I was at an open mic at The Ark in Ann Arbor the first time I really got hit hard by a Townes Van Zandt Song. I had joined a pretty intense songwriting group and was really starting to study the craft of songs I liked, hoping to figure out how to write a good one myself. A great singer named Chris Buhalis got up on stage and sang "To Live Is To Fly". I've never heard anyone do a better version, I'm thankful I have Chris's first tape that has it. Chris did a bunch of Van Zandt songs and made me hear them in a whole new way. I was a convert. I learned a dozen of his songs and went to see him play at The Ark shortly before he died. He wore a leather buckskin jacket, had long graying hair and was so charismatic he almost seemed to have a visible aura around him, although his guitar playing and singing was a shadow of what it once was.

I became a Guy Clark fan long after my wife was already a huge fan. I saw him play at a big outdoor theater in Lowell, MA with Verlon Thompson, an amazing guitar player. Three things I remember. First was when he walked on stage, under a sign that said "No Smoking". First thing he did was light up a cigarette. The second thing was his groove. His guitar playing had a pulse, his timing was rock solid. The only other person I had physically felt have a groove like that was Martin Sexton. The third thing was his catalogue of songs. He sang over 20 songs and each one was a masterpiece. Townes was all about feel and poetry and inspiration. It seemed like Guy must have poured over every line, every note, of every song to make sure there wasn't a weak spot anywhere.

I saw Eric Taylor last night at Club Passim, the last surviving member of what I think of as the big 3 - Townes, Guy and Eric. Nanci Griffith, Lyle Lovett and Robert Earl Keene (The next big 3) stood on their shoulders. I actually had gotten to play a gig with and hang out with Eric Taylor about 15 years ago. After the show I headed over to the Peddler's Daughter in Haverhill, MA , then on to an all night diner with him, my wife and Kyle Shiver to hear story after story. He was charming, smart and mesmerizing on stage. Like all great guitar players who accompany themselves he has a distinctive style that is impossible to duplicate exactly. Eric never got as well-known as Townes or Guy and I guess in a lot of ways his music is less accessible - darker in some ways than Townes, not crafted in a traditional style like Guy's. The imagery in his songs is visceral, often you don't know exactly what is going on but it hits you emotionally all the same. I love his music.


It was a different kind of show last night. Years ago when I saw him he strode on stage, didn't talk much but projected a muscular guitar sound and voice that grabbed you. This time he came up with the help of a cane and sat down before starting his set. His skills were all intact - the guitar playing and voice still there. It isn't always with performers as they grow older. The biggest difference was in his stage presence. He talked a lot. He may have spent more time telling stories than playing songs - it didn't matter. He told stories about Bill Morrissey, Guy Clark, Townes Van Zandt, Lightnin' Hopkins, junkies on the street of New York, past relationships, his own struggle with substance abuse. He played a bunch of cover songs. Rather than a "concert" it felt like an intimate hang. I was grateful to be there and thankful that Passim in Cambridge books shows like that. I'm always amazed that in town full of songwriters so few of them come out to see the ones that I think are some of the best ones ever - Willis Alan Ramsey, Steve Forbert, Eric Anderson. This fall at least two of the greats are coming through town - Peter Case at Atwoods Tavern and Eric Anderson at Passim - maybe I'll see you there.