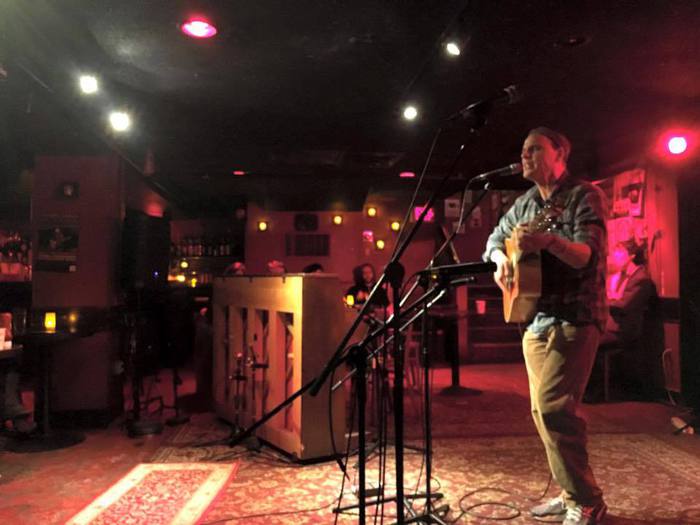 Making the drive down to Cambridge to play an open mic is a familiar ritual, repeated countless times in my 20’s and early 30’s. Even when I was gigging regularly I played them - to try out new songs, to hang out with my friends, to spread my name around just a little more. I didn’t play an open mic for 10 years after my daughters were born. In January I decided to try and bring my guitar and songs back out into the world once a week for a year. I played my guitar all the time at home, but the muscle that wrote songs and performed them had atrophied. Greg Brown, in his great song “Billy From The Hills”, sings of the complacency that kills - I needed to break my routines.

In January and February of this year I hit the open mics closer to home - The Pressroom and Blue Mermaid in Portsmouth, The Stone Church in Newmarket, The Grog in Newburyport. All had their charm but none had the intensity or listening audience that I remembered in Cambridge. I’m heading down to an open mic tonight that started after I ended - The Lizard Lounge Open Mic Challenge, run by Tom Bianchi. The only open mic I know that you need to sign up for weeks beforehand due to it’s popularity.

Descending the steps into the club is a continuing deja vu experience. I played this room in my previous life, opening for Kevin So, other times headlining the Soul Low acoustic series they ran. The crowd is sparse initially - I always get where I’m going early. My buddy Kevin made the drive down from Amesbury with me - my other buddy Kevin So, in town from Nashville, said he would drop by later. Matt Smith and Abby Altman, managers at Club Passim, are there as well.

Tom isn’t hosting tonight, George Woods is, a Facebook friend I’ve never actually met. It’s a contest. There are 25 acts. A judge, who changes weekly, will pick 3 at the end of the night to play one more song and then choose a winner. Winner gets a cash prize. The judge tonight is Mark Stepakoff, a fine songwriter who has been part of the scene for a long time.

Open mics are the great equalizer. All that matters is what you do in the two songs you play on the stage. Nobody cares what you’ve done, the places you played, who has recorded your songs. The two Kevins, Mark and Matt know me - nobody else has any idea I used to be part of this scene. This would have bothered me in the past, but I welcome it now. When I first was playing out, 20 years ago, my goals were much different than the ones I have tonight. I’m not looking for a gig. I’m not looking to blow people away. My goals are internal ones - relax on stage, play my songs at the top of my ability, reconnect with the friends I haven’t seen in a long time. Don’t fall asleep on the drive home.

George Woods is an enthusiastic, personable host, totally comfortable in his role. The Lizard Lounge is a great place to play and see music, the audience arranged in a semi-circle around the stage. People listen. The sound and mix on stage is perfect. I play early - fourth on the list. I feel comfortable, but I’m not relaxed enough for my hands to do all they are capable of on the guitar. It’s okay, I’ve always been more about the song than the musicianship and I remember all the words . That’s not as easy as it sounds. “Back When I Met You” and “Foulmouth Kelly”, two songs from my first CD. If the best I could do is 100, I put forth a 80. That’s what I could do tonight. It’s good to play in front of Kevin So, who backed up both those songs on my album, Matt Smith, who booked me so many times at Passim, and the listening crowd who have never heard a Carl Cacho song.

There are some excellent players here tonight - Ari Sky Walker has a lot to offer. She has an intensity about her delivery that captures my attention. My friend Kevin likes her music and she offers him a home burned CD. That’s a good way to make fans. She’s brought a posse with her, all players/singers/rappers. It’s entertaining and moves the night along. Amy Mantis brings her new guitar and plays a couple of engaging songs. Another standout is someone who I guess is a great bass player who has taken up the acoustic guitar -I can’t remember his name - but he plays the hell out of his guitar and is a strong singer as well. I don’t get bored throughout the night.

Mark call myself, Amy and a three piece band up to play one more song at the end of the night. I wasn’t planning on being a finalist, or even staying until the end, but here I am. I can’t remember the last time I played my guitar after midnight. I play “Bordertown”, more relaxed than I was earlier in the night, if not completely at ease.

I drive home with 63 dollars more than I left with. I haven’t made money playing music in a long time. I get home after one in the morning - haven’t done that in a while either. The next day I get a couple of gig offers, a result of winning the Open Mic challenge. My small, personal mission is accomplished - I’ve shaken up my routine.