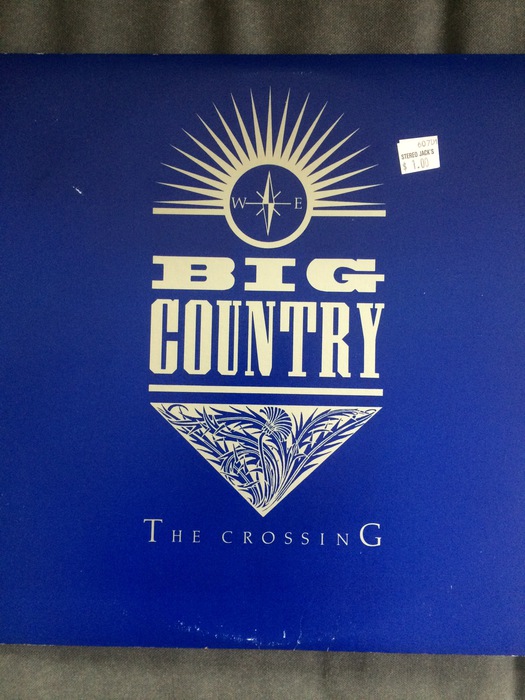 One dollar records are the perfect excuse to get that one song you liked by a particular artist as a kid on vinyl - “Sunglasses At Night” by Corey Hart - “Reunited” by Peaches & Herb - “Harden My Heart” by Quarterflash - I have many full length albums I initially picked up for the nostalgia wrapped up in one song on them. Sometimes I like the whole album, sometimes that one hit song is the only bright spot.

I was fourteen years old in 1983 and addicted to MTV. It was not unusual for me to stay home from school and record songs off our tiny TV with my little tape recorder - “Hungry Like The Wolf’, “Mexican Radio”, “Video Killed The Radio Star”, “You Got Lucky” - all songs I still love today. Nothing could be done on a Sunday morning because I would be parked in front of the radio, pen in hand, keeping track of Casey Kasem’s top 40. I remember when Big Country appeared on the scene with the single “In A Big Country” from “The Crossing”. They got a lot of attention for a one hit wonder, especially when you consider their one hit didn’t even crack the top 10. I saw Big Country rock it on “Saturday Night Live”. I read in Rolling Stone about how they made their guitars sound like bagpipes. The video on MTV that had them performing along with scenes of them riding motor bikes, rock climbing and a burning house. It didn’t really make much sense, but at the time I thought it was very cool.

Big Country had more of an edge than most most of the bands involved in the second British invasion - Culture Club, Modern English, Kim Wilde, Dexy’s Midnight Runners - none had the biting, guitar driven sound that made Big Country stand out. They disappeared from my teenage world pretty quick and I never bought their album - I liked the song, but not enough to shell out a couple of weeks allowance for it.

I’d seen the album many times over the years in my travels, usually priced at 3 bucks or above. I always told myself I’d get it if I ever saw it for a buck, to add to my collection of 80’s bands who populated MTV in it’s early days. That day arrived at the beginning of April as I was record shopping at Stereo Jacks in Cambridge, MA before before playing a local club. Current prices on Ebay all all over the place - four dollars to over 20 bucks.

Used records are like vintage guitars to me in many ways - they have a history to them. Find an old, beat up Grateful Dead record from the 70’s and you know someone rolled a joint on it. Find an old Abba record and you know someone danced around their room to it. I don’t mind a little wear to the covers of my used records as long as they play well. On the back of this particular copy of “The Crossing” someone has written what I assume is a name - “RA Danca” or “Damca” along with the date -11/83. On the inner sleeve they have made corrections to the lyrics. Okay - this was no casual Big Country fan. They knew this album and took good care of it - it’s in NM condition. 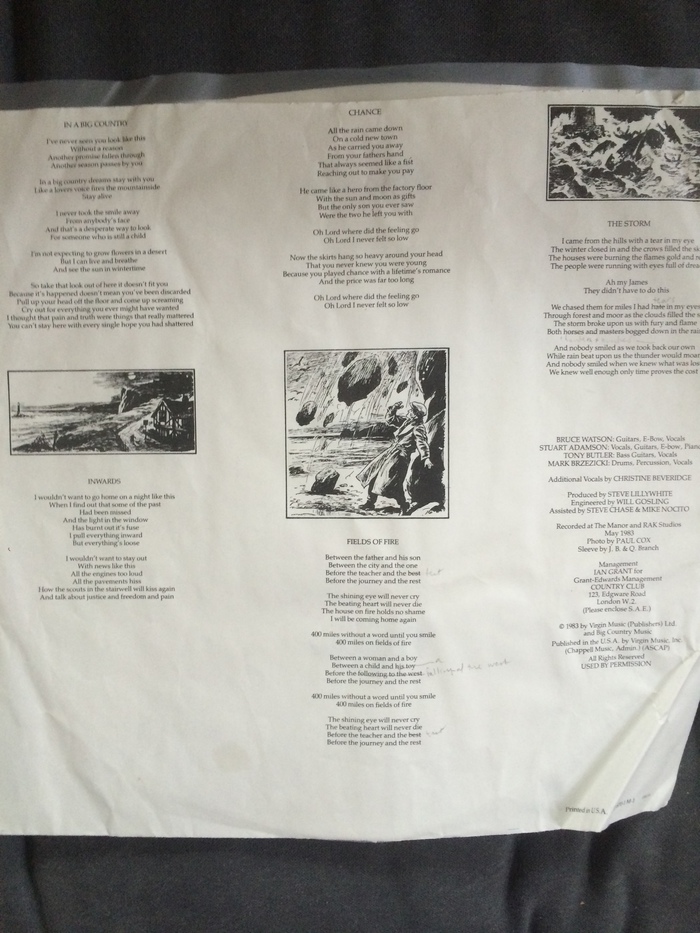 I give it a bath on my record cleaning machine (good album hygiene is important!), place it on my turntable and drop the needle. “In A Big Country” is the first song. Silence, then BOOM - That classic eighties drum sound explodes from the speakers, spread across the soundstage. There’s a quick glitch in the timing, maybe a recording edit or a flaw in the pressing. Stuart Adamson, songwriter and lead vocalist, lets loose with a “Cha”. The familiar guitars come chiming in, center stage. Stuart again foreshadows the tune with a few yells of “come up screaming”’ . The bass plays a repetitive, sliding riff that never caught my attention before. It is a long intro - they make us wait for the verse. A piano plays a melody, bathed in effects. The guitars change sound, coalesce around the main riff and the verse comes in, lead vocal double tracked in octave harmony. Then the famous bagpipe guitar sound. I’ve heard the song a thousand times but never listened to it this closely. The song has several different sections, with a lot of rhythmic and guitar sound changes. It’s not a warm sound, and gets a little painful when cranked up, but my system can unravel it pretty well. It’s a wall of sound - I don’t bother trying to place where the instruments are, I just absorb the feeling.

This is not a happy album. Even the black and white pictures on the inner sleeve reflect a somber mood - pictures of a capsized boat, men huddled around a smoky fire, a man avoiding falling rocks. “In A Big Country” is a very satisfying song - It’s catchy, it rocks , it’s musical and anthemic in presentation. I never thought much about what it was about - as I listen to it and the other songs on Side 1, disillusionment, poverty, struggle and the search for hope seem to be the themes. Nary a love song to be found. I find unexpected poignancy when Stuart sings-

“I’m not expecting to grow flowers in the desert but I can live and breathe and see the sun in wintertime”. Is it really that bad? - hey, you got a record deal!

Although I don’t know too much about Stuart Adamson, I do know that he tragically took his own life a few years ago. Perhaps he was a man who had demons right from the get go, which would explain the bleakness of the album.

The song winds down with a surprisingly funky brief bass and drum breakdown as well as a few more “Cha’s!”. It’s a great song.

“Inwards” is the next song. Double guitars, left and right of center, staccato riffs in counterpoint. These guys can really play. The dynamics and energy are similar to the first tune but the soundstage is wider and the instruments slightly more distinct. The vocals are up a little higher in the mix. When the song breaks down for a few bars to vocal, bass, drums and a single guitar space opens up and I can hear why they have been compared to U2. The bass player’s name catches my eye while perusing the liner notes - Tony Butler - wait a minute - I pull out my copy of “Empty Glass”, Pete Townshend's classic solo album - Tony Butler plays bass on it! And the drummer, Mark Brzezicki, plays on it as well! This put things in a new light for me. This is no garage band. When I hear a song like “Hit Me With Your Best Shot” or “867-5309 Jenny” I can understand it musically right from the get go - the crunchy power chords, the straight ahead chorus, the catchy riff - I can see a band in the garage putting it together. Big Country is more polished in a lot of ways, despite their almost punk -like social aspirations and energy.

“Chase” slows things down. Bass drum and electric guitar dead center, then the vocal comes in in on top. Acoustic instruments come into the same space. Sometimes the instruments pan out wider during the instrumental breaks. The vocal is more prominent and the harmonies are a little sweeter. Late in the song there is an understated power chord solo and acoustic guitars low in the mix make their way to the right and left.

“Fields Of Fire” starts with a military feel, segueing into a Clash like “Should I Stay Or Should I Go” riff for the vocal. I’m starting to lose interest. There just is not a lot of dynamics to the music. The bagpipe guitars make another appearance and a heavily processed guitar almost plays a solo, though it’s more of a melody counterpoint.

The last song on the side, “The Storm”, starts with long, synthesized guitar riffs before breaking into acoustic guitars, mandolins and that familiar militia drumming. A female vocalist soars above the mix, high and to the right in the soundstage, then comes and joins the band in the center as the song ends.

I listened to Side 1 about 10 times while writing this. “In A Big Country” is the only song I could really get into, and I tried to get into the other ones. Big Country has a lot of fans, and I see why. I greatly admire what they are going for lyrically - it just doesn’t do it for me. The music has it’s high points but gets a little monotonous for me. The sound of the album is average. In my made up grading system in my head I’ll give it a C, both for the music and the sound. The single “In A Big Country” gets a solid B however - I wish I found the rest of side one as interesting.