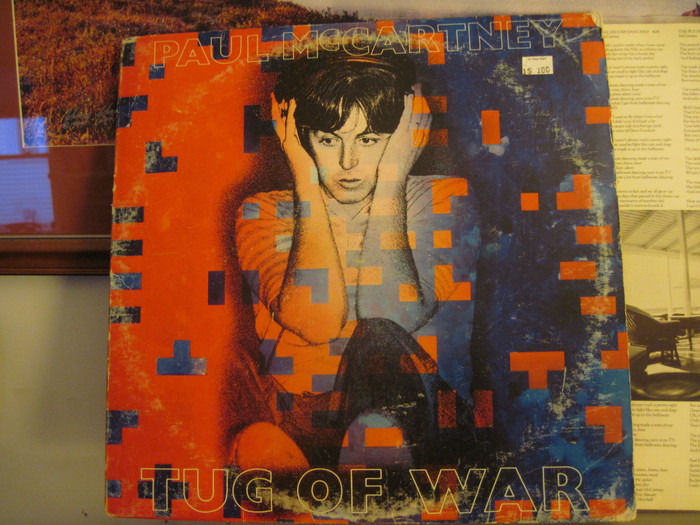 One dollar albums will test the resolve of any record collector trying to restrain the boundaries of his or her ever expanding vinyl mountain. My collection is littered with them, audio artifacts that I have never listened to, had no true interest in, but acquired because it seemed such a shame to not buy it for less than a small coffee at Dunkin Donuts. It amazes me the records that you can buy for a buck at many used record stores, thrift stores and yard sales. Walk into Stereo Jacks in Cambridge with 20 dollars and you can get 17 (you have to pay tax!) classic rock/pop albums - Bonnie Raitt, Jackson Browne, Eddie Money, Carly Simon - the records that were produced and bought by the millions, only to be cast aside or sold for pennies when their feckless owners downsized to compact discs, or, even worse, decided that they had no need to actually own music anymore.

I pulled one of these sad little time capsules from the shelves last night when perusing my collection, an activity I equate to an archeological dig. “Tug Of War” by Paul McCartney. The sticker on the beat up cover proudly proclaims 1$, In Your Ear. I can’t remember buying it and certainly have never listened to it. It came out when I was in eighth grade with “Ebony And Ivory” littering the airwaves like pollen for months. I’m sure I bought it sometime between the ages of 35 and 45, both for nostalgia and the belief that anything Paul McCartney does has to be worth at least a dollar. I have all the Beatle albums and much of their solo work. This particular album I have always associated with the beginning of the end of Sir Paul’s commercial and artistic dominance. His last really big album, I think the last one to make it to number one on the US charts.

What does a dollar get you in terms of sound? It is common these days for reissued, remastered from the original analog tapes, pressed at the best presses, stamped on the purest, heaviest vinyl, marketed to the audiophile listener records to go for 30-60 dollars. I have quite a few of those. Let’s put this one dollar album on the table, this mass produced, thrown to the curb, anonymous pressing of unknown origin, kind of scuffed and unashamedly pop record, let loose from it’s inner sleeve to spin once again beneath the needle.

I would say it’s in Excellent Condition, with the cover being VG.

You can get it for around 4 bucks on Ebay, probably 8 bucks with shipping. I got a bargain!

Checking out the credits, I see an ominous sign - written on the back - “This album was mixed digitally” - Why disturb the precious analog chain this way? Back in the eighties I guess it was a mark of progress, a feather in the cap, a “look how new and hip we are”. Maybe they thought it sounded better or it made the process easier. It doesn’t matter, it only cost me a dollar, less than an mp3 from Amazon.

Promising signs from the credits - McCartney plays acoustic and electric guitars, bass, piano and drums on the majority of tracks. Ringo Starr, Stevie Wonder, Carl Perkins, Stanley Clarke and Denny Laine all make appearances. McCartney is incredibly musical, I like it when he plays all the instruments - although we will lose the live, energetic take for a nuanced layered one. I put the record on my Rega Rp8 and sink into my listening chair. It’s a fairly quiet album after being cleaned, definitely not abused or played a lot. The pressing has the slightest of warps. It opens with a cavernous, environmental snapshot of men talking, shouting, grunting. Symbolizing a “Tug Of War” perhaps? It seems kind of pointless to me. It breaks right into the song “Tug Of War” - acoustic guitar and McCartney’s voice dead center. It’s stunning in it’s beauty. I had forgotten how pure and sweet McCartney’s voice can be and both it and the guitar sound natural, if not the palpable, reach on out and touch it quality evident in truly great recordings. Strings come in gently, low in the mix (hello George Martin). Tonality is excellent, the lower register strings sound resonant. The track grows with crunchy electric guitars, background vocals, and the strings coming up in the mix. The strings envelope McCartney, somewhat diffuse. The Background vocals come from the right and left, slightly forward of the rest of the mix. Still all good. The electric guitars have a welcome rough edge to them. It then takes a slight turn for the worse with the background vocals panned right and left, too loud and with too much sheen for my liking, the strings taking prominence in the mix, horns that seem to clutter the environment and a military snare which I feel is pretty cliched. I feel that when everything kicks in there isn’t enough “air’’ between the instruments, everything is fighting to be heard. Despite that it’s a good song and I enjoy it more than I thought I would, especially since it breaks down to acoustic, strings and vocal at the end.

“Take It Away” starts immediately, as the first song fades, there isn’t much space between any of the tracks. I kind of like that. Percussion drifts across the soundstage then McCartney’s bass slams in, dead center. Hey, I know this song! Right away I am transported back 35 years, back seat of my dad’s orange Volkswagen bug, listening to Casey Kasem’s Top 40. Nostalgia washes over me in the best way and I get that emotion you want when listening to music. One of his lesser hits, it is nevertheless irresistibly catchy. There’s a little more space in this track and the background vocals serve the song more effectively, coming in closer in space to the lead vocal, sometimes seeming to sweep forward. The soundstage is wide, if not very deep, and I wouldn’t call it a warm sound, but it communicates to me. The horns come in again, creating a hook and making me realize that in general Paul likes the horns more than a guitar solo. A winner track.

“Somebody Who Cares” starts promising, with McCartney playing Spanish guitar, panned in stereo and Stanley Clarke improvising bass lines in the middle like a vocal melody. McCartney’s touch on the guitar is strong and much more than a rhythm part - I could listen to a whole track of just McCartney on acoustic and Clarke on bass. McCartney has improved tremendously as a musician since his first solo album, everything is tight and clean ( I kind of like a little grease in the skillet though). It could be top session musicians playing these tracks. In comes the vocal , again centered with Paul using his sweet voice and we are off for a pleasant, if forgettable, ride. It is again very “hummable”, but it’s the kind of melody I’m sure McCartney comes up with as he’s filling up his car with gas (does he still drive - or does he always have a driver?). Clarke falls into a predictable bass line and doesn’t assert himself again. McCartney lets loose with a too brief acoustic solo in the middle, slightly left of center stage, the loosest moment on the album. There are some pan pipes thrown in, so if you like that kind of thing give a listen. They do have a woody, breathy, pleasant sound and emerge from both right and left. The background vocals are not panned as hard right and left, making them seem more natural. Careful listening and a revealing system also exposes a slight rasp on a couple of vocal lines from McCartney, surely left in on purpose. A welcome touch of humanity. A little groove damage here roughens things up for a few second, then disappears. Stevie Wonder jumps in on the next track, “What’s that You’re Doing”. Paul gives up a little space in the soundstage to him, letting Stevie be in the middle while he stands a little to the left. Classy move Paul! Paul plays every instrument except for Stevie playing synthesizer and I have to say it almost gets what it’s going for, musically at least, that Stevie Wonder funk of “Superstition” and “Living For The City”. Can’t touch them lyrically. A little uptight, but check out Paul on percussion in the right channel. I hope he didn’t sample and loop it because it’s pretty intense. Prince may be the master of “I’m my own band, goddammit!” but Paul is a close second. Stevie gets Paul to use a little more of his rock voice, but we are still light years away from “Maybe I’m Amazed”. It is a little busy, but everything seems to find a little space in the soundstage to strut. It’s a fun 6 minutes.

McCartney has a way with words, but tends to keep things straight ahead. There’s no poetry here - he writes pop songs. The only time he touches me with his words is the last track on the side, “Here Today”, about the recently (at the time) murdered John Lennon. We are back to McCartney solo, acoustic guitar and strings. Twenty minutes in, on the inner grooves, but there is not a touch of distortion. There really isn’t much to add except that it is perhaps the best sounding track - probably because there isn’t too much going on. I recall a buddy telling me that Paul sang this at a Fenway Park show and it was amazing how the whole crowd grew silent and you could feel the sadness in the air.

I listen to side one again as I go about my morning, this time on my Pioneer pl-518. The album is more enjoyable in some ways, I’m playing it louder and letting it wash over me rather than pick it apart. It has a little more of the analog warmth on the cheaper system, still no distortion or mistracking. In the made up grading system I have in my head I would give this record a C+ for sound and music or a perhaps a B- because it is, after all, Paul McCartney. It doesn’t have the warmth, instrument separation, soundstage or “wow” factor my favorite albums have, but it acquits itself well. I didn’t even get to “Ebony and Ivory”! I would love to hear the compact disc - Despite it’s flaws I would put even money on the vinyl sounding better, especially the acoustic guitar/vocal parts. All of this for a dollar. Perhaps I’ll pick up “Pipes Of Peace”, I often see that in the cheap bins…